Terumi Imamura (今村照美) is a migrant from Sasebo, Japan to Los Angeles and a comfort woman denier. She has been in the leadership position at True Japan Network, a denier organization of Japanese people in the greater Los Angeles area. She spoke out against the proposal to enact a comfort women memorial in San Francisco at the Board of Supervisors meeting in summer 2015 (along with Koichi Mera, Yoshi Taguchi, and Mariko Okada-Collins) and facilitated a denier panel at the UN Commission on the Status of Women Parallel Events (2016) featuring Mio Sugita, Koichi Mera, and Kiyoshi Hosoya.

Tetsuhide Yamaoka (山岡鉄秀), real name Hideyuki Okuda (also goes by “Hardi Odaka”), is the president of Australia-Japan Community Network, even though he actually live in Japan. In addition to leading AJCN’s effort to prevent the establishment of comfort women memorials in Australia, Yamaoka frequently contributes to conservative publications in Japan and speaks to the supporters of revisionists’ lawsuits against Asahi Shimbun newspaper.

In 2017 Yamaoka became a fellow at Historical Awareness Research Committee within the Institute of Moralogy, one of the core organizations comprising Japan Conference. He is also the author of “日本よ、もう謝るな! 歴史問題は事実に踏み込まずには解決しない” (2017) which he translates to “Make Apologies History: Letting the Facts Be Out Guide.”

Yamaoka was forced to resign from AJCN in late 2019 due to violations of internal ethics code. Around the same time, Yamaoka was accused of plagiarizing Ikuko Atsumi, a feminist turned nationalist writer and activist. In August 2020, AJCN announced that it was pressing charge against Yamaoka for embezzlement of its funds when he closed AJCN’s bank account in Japan.

“The Facts” is a paid advertisement published in the June 14, 2007 issue of The Washington Post by a group of Japanese conservatives calling themselves the Committee for Historical Facts in an attempt to dissuade the U.S. House of Representatives from adopting H.Res.121, a resolution urging Japan to “formally acknowledge, apologize, and accept historical responsibility in a clear and unequivocal manner for its Imperial Armed Forces’ coercion of young women into sexual slavery.” 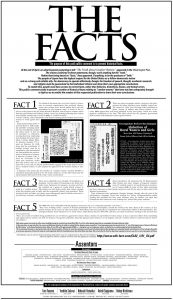