Japanese “Comfort women” deniers often cite “Comfort Women of the Empire,” a book written by Yuha Park of Sejong University, South Korea, to claim that the average age of “comfort women” was “around 25,” and therefore memorials that depict teenage victims (such as the one in Glendale, California) are misleading. Definitive data is unavailable, but this reading of Park’s writing is not supported by the evidentiary source material that she invokes.

“Comfort Women of the Empire” was published in Korea in 2013 and then in Japan in 2014. Since the publication of the original version in Korea, Park has been the target of civil and criminal cases in court for allegedly libelous statements toward survivors of the Japanese military “comfort women” system, which forced her to redact portions of the book in Korea. The controversy over the state intervention on an academic publication is ongoing, distinct from the controversy over the content of the publication itself.

The English version of “Comfort Women of the Empire” is reportedly in the works. There are third party “summaries” of the book available for download at various Japanese right-wing websites, but the author has specifically stated that many of them distort her work.

On pages 64-65 of the Japanese edition of “Comfort Women of the Empire,” Park cites a 1944 U.S. military prisoner of war interrogation report (which is itself often misused by the right-wing camp) as an evidence that the typical age of “comfort women” was “around 25,” challenging the historical consensus that a large number of “comfort women” were minors at the time of their recruitment.

This is an important point for those who are concerned about the potential violation of international law by the Imperial Japan because the 1921 International Convention for the Suppression of the Traffic in Women and Children required signatories including Japan to prohibit the transportation of women and children under age 21 across national borders for the purpose of prostitution, even with their consent.

The figure of “around 25” is supposedly calculated by averaging the ages of 20 Korean “comfort women” listed in the 1944 report, but the actual average turns out to be 23.15, not “around 25.” The median and mode of the 20 women, which is more illustrative of the cohort than a simple average, are both 21. (See below for the appendix of the 1944 report that lists 20 women interviewed.) To arrive the number closer to “around 25” that Park cites, we would need to include two Japanese “house masters” (brothel managers) who are aged 38 and 41 (then the average is 24.64). 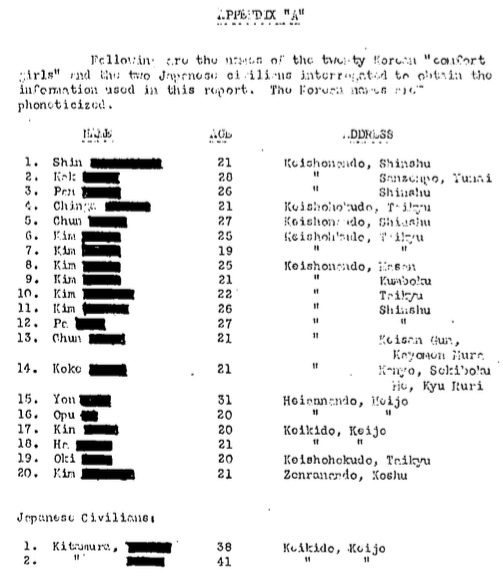 Further, because the women were recruited and forced to become “comfort women” two years before they were interviewed by the U.S. military according to the report, the real median age at which they were recruited is 19. In fact, 12 out of the 20 women listed were under 21 at the time of recruitment. Finally, if kazoedoshi age reckoning (which was used in Japan and Korea at the time) was involved, their actual age may have been 1-2 years younger. (Under kazoedoshi, a baby is considered one year old the minute he or she is born, and becomes a year older at the beginning of the next year, so a child born on December 31st would become age 2 on his or her second day on earth.)

What about other women? Again, comprehensive data is non-existent, but historian Puja Kim of Tokyo University of Foreign Studies examined six volumes of Korean “comfort women” survivor testimonies published between 1993 and 2004 by the Korean Council for the Women Drafted for Military Sexual Slavery by Japan. Of the 78 women who shared their stories, 73 were underage at the time of recruitment; mode and median are both 16. (“Chosenjin ‘Ianfu’ wa naze shoujo ga ookatta noka?”, in Heiwa no shoujo zou wa naze suwari tsuzukeru noka, 2016.)