When confronted, “comfort women” deniers like Tony Marano often attempt to deflect the label “denier” by arguing that they do not “deny the existence of comfort women.”

But like “Holocaust denial,” the phrase “comfort women denial” refers not just to the complete denial of the existence of “comfort women” altogether, but also to the denial of important aspects of the historical events that are established as facts. A casual look at the claims made by known Holocaust deniers reveal eerie similarities between Holocaust denial and “comfort women” denial (and this comparison between denialisms stands even if, as some contend, two atrocities themselves should not be compared to each other).

Mark Weber, the long-time director of the Holocaust denial organization Institute for Historical Review has said in a 1992 interview:

If by “holocaust” you mean the political persecution of Jews, some scattered killings, if yo mean a cruel thing that happened, no one denies that. But if one says that the “holocaust” means the systematic extermination of six to eight million Jews in concentration camps, that’s what we think there’s no evidence for.”

The IHR also posted on its website the following until at least 2009:

The Institute does not “deny the Holocaust.” Every responsible scholar of twentieth century history acknowledges the great catastrophe that befell European Jewry during World War II. All the same, the IHR has published detailed books and numerous probing essays that call into question aspects of the orthodox Holocaust extermination story, and highlight specific Holocaust exaggerations and falsehoods. IHR publications have devoted considerable attention to this issue because it plays an enormously significant role in the cultural and political life of America and much of the world. As a number of Jewish scholars have acknowledged, the “Holocaust” campaign is a major weapon in the Jewish-Zionist arsenal. It is used to justify otherwise unjustifiable Israeli policies, and to extort enormous sums of money, especially from European countries and companies.

There is no dispute over the fact that large numbers of Jews were deported to concentration camps and ghettos, or that many Jews died or were killed during World War II. Revisionist scholars have presented evidence, which “exterminationists” have not been able to refute, showing that there was no German program to exterminate Europe’s Jews, and that the estimate of six million Jewish wartime dead is an irresponsible exaggeration.

The author does not deny the occurrence of isolated cases such as the Semarang Incident in the Dutch East Indies in which Ms. Jan Ruff O’Herne was involved. It was an apparent “war crime” in Indonesia committed by military personnel. […] However, this was an isolated case and should not be used to characterize or to generalize the state-managed Comfort Women System.
– Hiromichi Moteki, Society for the Dissemination of Historical Fact (Source)

It is more than funny how some strident activists in the US are depicting me as “Comfort girls denier”. That’s hilarious. Nobody in Japan denies them OMG! (((o(*ﾟ▽ﾟ*)o))) Neither do I.
– Yujiro Taniyama, film producer of Scottsboro Girls (Source)

These guys on the photo are saying “there was no “military” comfort women forced by Japanese army but not denying the existence of the comfort women.
– Shunichi Fujiki, Texas Daddy Japan Secretariat (

I am labeled “comfort women denier,” but it should be “comfort women = sex slaves” denier to be accurate. Language must be used precisely. False premises lead to confused arguments.
– Kiyoshi Hosoya, Japan Family Values Society (translated from Japanese, Source)

Similarities between Holocaust denial and “comfort women” denial do not end here. For example, they both often promote conspiracy theories that those who are preserving historical memory are operating under nefarious geopolitical or financial motives:

As a number of Jewish scholars have acknowledged, the “Holocaust” campaign is a major weapon in the Jewish-Zionist arsenal. It is used to justify otherwise unjustifiable Israeli policies, and to extort enormous sums of money, especially from European countries and companies.
– Institute for Historical Review (Source)

It’s important to note that the countries that are making a big fuss over this are China and South Korea […] This is not about human rights or sex-slavery. This is about politics, money, and racism towards Japanese. In other words, this issue is a geopolitical tool that China uses to attack Japan.
– Michael Yon, “journalist” (Source)

The Comfort Women Mafia has been successful in placing plaques and a statue memorializing their version of the Comfort Women story in communities all across the United States. Why? […] Very simple: The Comfort Women Mafia’s one area of motivation is to bash Japan. Their goal is to tarnish the image of Japan among the populace in the USA.
– Tony Marano, video blogger (Source)

In our last post, we exposed that Shunichi Fujiki a.k.a. “Shun Ferguson” (Japanese representative of “comfort women” denier “Texas Daddy” a.k.a. Tony Marano) had used the pseudonym “Comfort women trying to get second big money” and the fake email address “comfortwomenistotallieofgreedykorean@givememoney.co.kr” to post a comment on our blog, which is completely unacceptable. He was caught because the post originated from the same exact IP address as the one he had posted from previously.

Mr. Fujiki has not responded to the allegation, but “Texas Daddy” himself responded, demanding that we “prove” that Mr. Fujiki was indeed responsible for the offending comment.

We suggested that he check with Mr. Fujiki himself, but Mr. Marano refused, stating that he would “not insult my good friend by asking him to comment on slander.”

Fine then, here is the proof. 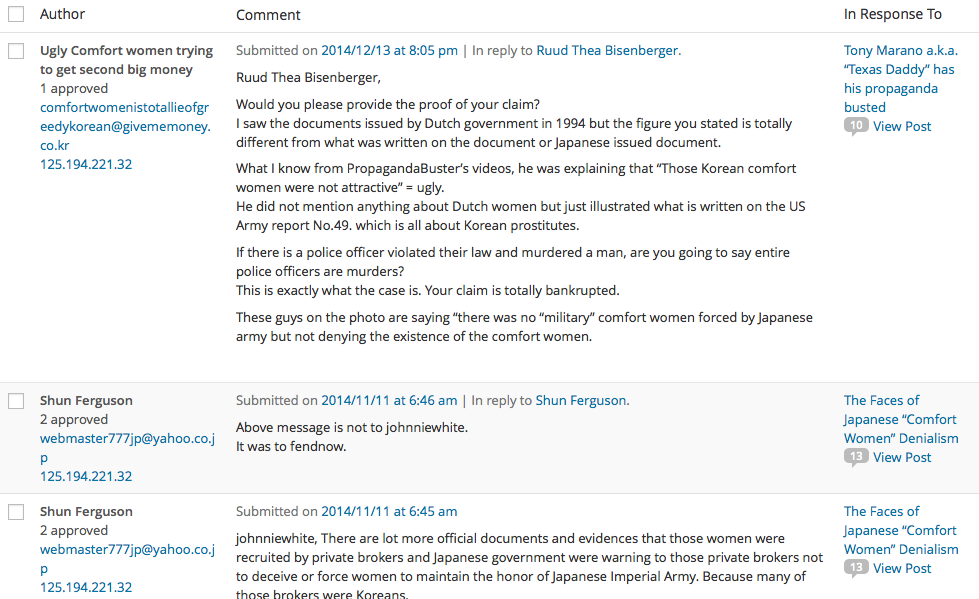 “But you could have doctored the image!” you say, Mr. Marano? Okay, here’s the screen recording showing how I log into WordPress and list comments originating from 125.194.221.32.

Of course, even that could be fabricated, theoretically, so Mr. Marano could continue to believe that his good friend would not do such a despicable thing if he so chooses. But most readers would understand that we have no reason to go out of our way to fabricate an evidence “proving” how despicable Mr. Fujiki is; we believe that his “comfort women” denialism is already damaging enough.

If that’s not good enough, though, we have a proposition for you, Mr. Marano. We are willing to enter into a binding legal contract whereby you front the money to hire a reputable forensic computer expert to verify our claim. If it turns out that we had fabricated any of the above evidences, we will pay you double the money you fronted. It’s up to you.

We welcome ernest conversations and debates, but we believe that there is no room for hate speech. We certainly don’t tolerate hate speech on our blog, even though sometimes things slip through (and please do let us know when you notice something).

So we almost did not approve a comment posted by someone using the pseudonym “Ugly Comfort women trying to get second big money” with an obvious fake email address “comfortwomenistotallieofgreedykorean@givememoney.co.kr“: it’s just not something we allow on our blog.

But when we went to the admin page to remove the comment, we noticed something interesting: the offending post originates from the same exact IP address as two previous comments posted by “Shun Ferguson” did.

As we discussed previously , Shunichi Fujiki a.k.a. “Shun Ferguson” is the Japanese representative for Tony Marano a.k.a. “Texas Daddy.”

Below is the full text of Mr. Fujiki’s comment (under the pseudonym “Comfort women trying to get second big money” and fake email address “comfortwomenistotallieofgreedykorean@givememoney.co.kr”), in response to another commenter Ruud Thea Bisenberger.

Would you please provide the proof of your claim?
I saw the documents issued by Dutch government in 1994 but the figure you stated is totally different from what was written on the document or Japanese issued document.

What I know from PropagandaBuster’s videos, he was explaining that “Those Korean comfort women were not attractive” = ugly.
He did not mention anything about Dutch women but just illustrated what is written on the US Army report No.49. which is all about Korean prostitutes.

If there is a police officer violated their law and murdered a man, are you going to say entire police officers are murders?
This is exactly what the case is. Your claim is totally bankrupted.

These guys on the photo are saying “there was no “military” comfort women forced by Japanese army but not denying the existence of the comfort women.

Mr. Fujiki’s rhetoric especially around his analogy re “if there is a police officer…” exactly matches his argument in a recent facebook post in Japanese, further affirming that this poster is indeed the real “Shun Ferguson.”

Mr. Fujiki, you are not only a historical denier, but also an additionally despicable individual for using a particularly hate-filled fake name and email address to attack people from around the world who question your fake history. If you are so ashamed of your own bigotry to disguise yourself, perhaps you should stop propagating it.