“Japanese Civilization” Research Forum (「日本文明」研究フォーラム) is an association of conservative scholars on Japan founded in 2019 at Reitaku University. The forum claims to be inclusive of full range of political and philosophical perspectives, but its board and speakers are comprised of predictably conservative to far-right individuals including Jason Morgan, J. Mark Ramseyer, Tetsuhide Yamaoka, and others.

Academics’ Alliance for Correcting Groundless Criticisms of Japan (不当な日本批判を正す学者の会, AACGCJ) is a group of conservative scholars founded in May 2017 to refute criticisms of Japan’s human rights records and historical responsibilities at United Nations and beyond, including U.N. special rapporteur David Kaye’s report on the suppression of freedom of press in Japan as well as various U.N. committees’ finding on the comfort women issue. Academics’ Alliance is a member of Japan NGO Coalition against Racial Discrimination (JNCRD), a fake human rights coalition of far-right groups.

Alliance for Truth about Comfort Women (「慰安婦の真実」国民運動) is a network of comfort women denier groups and individuals in Japan founded in 2013. The Alliance frequently sends delegations to United Nations functions, including the Human Rights Council (HRC), the Committee for the Elimination of Discrimination Against Women (CEDAW), and the Commission on the Status of Women (CSW).

Associated groups and individuals include:

The mailing address for the Alliance is the same as that of the Japanese Society for History Textbook Reform. 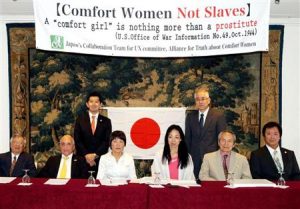 In July 2015, Alliance for Truth about Comfort Women sent its second overseas delegation to Geneva, Switzerland to participate at the pre-session meeting of the United Nations Committee on the Elimination of Discrimination Against Women (CEDAW) and to lobby at the United Nations Educational, Scientific and Cultural Organization (UNESCO) against the inclusion of Nanking atrocities and comfort women in its Memory of the World Register.

Delegation member Mio Sugita successfully obtained an opportunity to speak to the CEDAW to dispute the historical orthodoxy of comfort women by using the UN consultative status of International Career Support Association, which has become a vehicle to promote Japanese historical denial at the UN level. 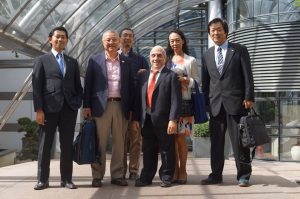 In August 2018, Alliance for Truth about Comfort Women sent its delegation to Geneva, Switzerland to attend the United Nations Committee on the Elimination of Racial Discrimination, which met to conduct the member state review of Japan over such issues as the rights of indigenous peoples, ethnic minorities, burakumin, and victims of military comfort women.

Over the last few delegations, the Alliance has expanded its mission to deny the indigenous status of Ainu and Okinawans at United Nations meetings, bringing members such as Hokkaido prefectural assembly member Masaru Onodera (小野寺まさる) and Satoru Nakamura (仲村覚) of Okinawa Policy Research Forum of Japan (日本沖縄政策研究フォーラム). During a lunch briefing at UNCERD, Nakamura gave a speech demanding the U.N. to retract the recognition of Okinawan people as an indigenous people.

In February 2016, Alliance for Truth about Comfort Women sent its third overseas delegation to Geneva, Switzerland to dispute the historical orthodoxy of comfort women at the United Nations Committee on the Elimination of Discrimination Against Women (CEDAW).

Prior to the meeting, eight Japanese right-wing groups submitted their opinions to the CEDAW. They are:

The “Coalition of Three Parties” is made up of Researchers of History on Modern Japan, Society for Dissemination of Historical Fact, and Nadeshiko Action.

In June 2017, Alliance for Truth about Comfort Women and its affiliated groups sent its delegation to Geneva, Switzerland to attend the United Nations Human Rights Council, taking advantage of the UN consultative status of the International Career Support Association. Mitsuhiko Fujii of Rompa Project (Happy Science) spoke at the meeting demanding a re-evaluation of the 1996 report by the UN Special Rapporteur Radhika Coomaraswamy.