In April 2015, language lecturer Mariko Okada-Collins invited filmmaker Yujiro Taniyama to screen his lengthy comfort women denial film, “Scottsboro Girls” at Central Washington University where she teaches Japanese. However, after Michael Yon warned Okada-Collins that the film’s content could be highly offensive, she asked Taniyama to shorten the film to allow room for additional speakers. Koichi Mera was invited to give a speech along with Taniyama, and Jason Morgan Skyped in as well.

Campus community strongly protested the historical revisionist event, and multiple counter-events were organized by students and the faculty. See a series of articles about these events in the June 1, 2015 issue of the Asia-Pacific Journal: Japan Focus Newsletter. 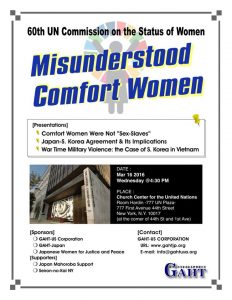 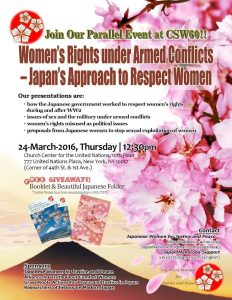