Japanese Conservative Union (一般社団法人JCU) is a far-right political group founded by Jikido Aeba, the founding president of Happiness Realization Party, and Shun Eguchi (江口俊), a former editor and board member of the Sankei Shimbun company. It is intended as a Japanese affiliate of the American Conservative Union (ACU).A

In 2016, JCU hired lobbyist firm Millfield Global Strategies in the U.S. for up to $412,000 to “establish and strengthen relationships” with presidential campaigns and PACs, members of the Congress, federal agencies, and others. Aeba boasted close ties with then-presidential candidate Donald Trump and enthusiastically supported him.

Since 2017, JCU has been paying another lobbying firm AKF Strategies LLC, whose principal is affiliated with American Conservative Union, $30,000 per quarter. JCU and AKF Strategies LLC appear to be violating Foreign Agent Registration Act mandate by falsely claiming in its filing to the U.S. Congress that JCU has no ties to foreign entity whatsoever despite the fact its mailing address is in Tokyo.

In December 2017, JCU hosted the first-ever Japanese Conservative Political Action Conference (J-CPAC) in Tokyo, a Japanese equivalent of the CPAC organized annually by the American Conservative Union. Featured speakers for the 2017 conference included:

Within two weeks after former White House Strategist and Breitbart executive Steve Bannon gave a keynote at JCPAC, the far-right news site featured an article on the comfort women issue which argued that it was “an opportunistic way to collect money from the Japanese, but it’s really all about the ethnic hatred that the Japanese, Chinese and Philippines have for each other.” (“China Funds Unauthorized Anti-Japan Comfort Women Statue in Manila, Philippines”, 12/28/2017)

The office of the JCU was originally housed within Sankei Advertising Inc. (産経広告社), an in-house ad agency within the Sankei Shimbun group. 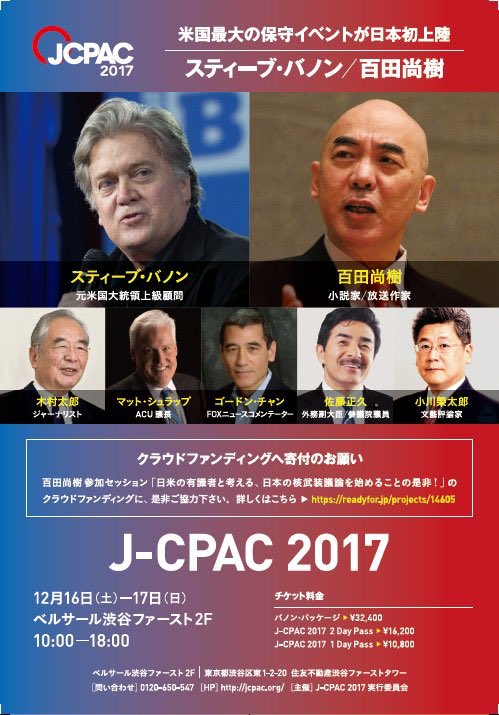