In recent months, the Japanese government has made increasingly aggressive moves challenging memorials dedicated to the victims of the Japanese military “comfort women” system not just in front of the Japanese Embassy in Seoul or the Japanese Consulate in Busan, South Korea, which Japanese officials argue violate the Vienna Convention on Diplomatic Relations protecting the “dignity” of diplomatic missions, but anywhere in the world.

The latest development in this trend is the amicus curie brief the Government of Japan filed in the lawsuit Gingery et al. v. City of Glendale on behalf of the Global Alliance for Historical Truth (GAHT), a Japanese far-right extremist group.

GAHT filed a lawsuit against the City of Glendale, California in 2013 after the city installed a memorial dedicated to the victims of Japanese military “comfort women” system. The suit was widely criticized by Asian American communities including local Japanese American groups, legal experts, and others, and resulted in a series of defeat by GAHT including penalties under California’s anti-SLAPP statute against frivolous lawsuits designed to stifle free speech.

On January 9, 2017, GAHT filed a request to the U.S. Supreme Court to reconsider the appeal court’s decision against them. For the Supreme Court to take up a case, four out of nine (currently eight due to the passing of the late Justice Antonin Scalia) justices must agree to hear the case, and they do so only in about 1-2% of the cases each year.

In the amicus curie brief filed on February 22, 2017, the Government of Japan criticizes not just the constitutionality of Glendale’s installment of the memorial that, in their view, “disrupt[s] the United States’ foreign policy” and “presents a significant impediment to Japan’s diplomatic efforts” as “the monument is not inline with the spirit of” the Japan-ROK Agreement (2015), but also “the inscription on the Glendale monument” itself. “Japan strongly disagrees that the inscription on the Glendale monument accurately describes the historical record, which Japan has studied at length,” the amicus states.

Attorney Jessica Ellsworth, a registered foreign lobbyist at the law firm Hogan Lovells which the Japanese government uses, served as the counsel of record for the Japanese government. In October 2015, Hogan Lovells set up an apparent astroturf (i.e. a public relations campaign disguising itself as a “grass-roots” civic group) Voices of Vietnam, which appeared out of nowhere, purchased a full-page color ad on the Wall Street Journal and held a press conference at the National Press Club to coincide with the visit of the President of South Korea criticizing the Korean military sexual violence against Vietnamese women during the Vietnam War. The press conference featured the former U.S. Senator Norm Coleman, also a lobbyist working for Hogan Lovells. Voices of Vietnam has been inactive ever since. 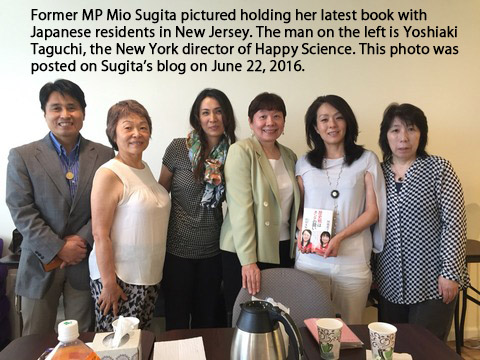 This week, foreign ministers of Japan and South Korea announced a bilateral “agreement” to “finally and irreversibly” settle historical disputes arising from the WWII-era Japanese imperial military enforced prostitution/sexual slavery known as the “comfort women” system. The agreement was reportedly reached under heavy pressures from the United States government, which has military pacts with both Asian nations, for its own geopolitical needs. The agreement has been widely denounced by the “comfort women” survivors and their advocates in South Korea, Japan, and elsewhere as an act of further violence to silence the survivors.

In a statement read by Japan’s Foreign Minister, Japanese Prime Minister Shinzo Abe acknowledged “the issue of comfort women” was “a grave affront to the honor and dignity of large numbers of women,” and expressed his “most sincere apologies and remorse to all the women who underwent immeasurable and painful experiences and suffered incurable physical and psychological wounds as comfort women.”

Abe’s apology is a reiteration of previous statements issued by the Japanese government, most notably the 1993 Kono Statement in that it accepted moral, but not legal, responsibilities for the suffering of women under the “comfort women” system. Japanese conservatives, including Abe himself, have long argued that Japanese military’s “involvement” in the atrocity was peripheral (e.g. performing medical checks at military brothels, etc.) and have rejected the notion that Japanese military itself was responsible for the trafficking and coercion of women and girls for sexual exploitation (see Dudden and Mizoguchi for a critique of Abe’s 2007 statement expressing this view, or our debunking of common revisionist talking points).

The new “agreement” does not go beyond Kono Statement in acknowledging Japanese military’s direct role in the coercion and trafficking of women under the “comfort women” system. Worse, the few remaining survivors of the “comfort women” system were cut off from the negotiation altogether, and their voices were systemically silenced. As a result, virtually none of the demands of the survivors are reflected in the final “agreement” that the Korean government accepted, supposedly, on their behalf.

Survivors and advocates continue to call on Japan to fully acknowledge Japanese imperial military’s direct culpability for the violence perpetrated against women from across Asia-Pacific, and to meet other demands of the survivors, which, according to Korean American Forum of California, include:

On Tuesday, July 21st, the Board of Supervisors (city council) of the City and County of San Francisco will vote on a resolution establishing a memorial for the victims and survivors of Japanese military’s WWII-era “comfort women” system. (Click for the text of the resolution.)

Japanese right-wing activists are waging a mass email campaign in opposition to the resolution. They are also seeking their supporters in the area to show up and voice their opposition at the meeting. Unfortunately for them, they forgot to include Mayor Lee’s contact information when they circulated a list of email addresses to email bomb.

Japan-U.S. Feminist Network for Decolonization (FeND) applauds and supports San Francisco’s leadership in acknowledging and remembering the victims and survivors of “comfort women” system. We sent a letter to the Supervisors and the Mayor in support of the resolution, and are working with our friends in the Bay Area to spread the word about the meeting on Tuesday.

If you are planning to attend the Board meeting, please read Debunking the Japanese “Comfort Women” Denier Talking Points so you know how the right-wing protesters are going to lie… and play the denier bingo! (Seriously, we’d like to hear what happens at the meeting, so if you attend it, do let us know!)

Today, Japan-U.S. Feminist Network for Decolonization (FeND) has submitted a letter to the Mayor and the City Council of Fullerton, California to express our support for its proposed peace memorial dedicated to victims and survivors of the Japanese “comfort women” system during the WWII.

City Council of Fullerton has already passed a resolution endorsing the U.S. House Resolution 121, leading a way for the Fullerton Museum Center board to approve the construction of the proposed memorial dedicated to former “comfort women.” But dozens of Japanese residents from surrounding areas, many of whom have come from Japan rather than from Japanese-American communities, are planning to storm the City Council meeting this Tuesday to voice their opposition to the memorial.

We are submitting our letter to demonstrate that these antagonistic Japanese nationalists do not speak for all of Japanese and Japanese-American individuals in the United States.

You can download the PDF file of our letter here.