When Japanese politicians visited Glendale and tried to “convert” Japanese American leaders who had supported the city’s peace memorial dedicated to the victims of Japanese “comfort women” system of enforced military prostitution, the politicians presented a copy of a U.S. military report from 1944 that they believed would “prove” their position that “comfort women” were simply prostitutes who followed Japanese military for business. Their American apologists Tony Marano (a.k.a. “Texas Daddy”) and Michael Yon both cited the same document when they descended on our facebook page to argue the same thing. Clearly, they view this U.S. report as their strongest evidence absolving Japanese military of wrongdoings.

The report is based on interviews with 20 Korean “comfort women” as well as two Japanese civilian “house masters” held by the U.S. military as prisoners of war in Burma. Because it was written by the U.S. Army that was still fighting against the Japanese Empire at the time, right-wing nationalists argue, it cannot be challenged as being biased in favor of Japan. Unfortunately, however, both Japanese and American military can still be biased against Koreans or women, and especially against Korean “comfort women.” 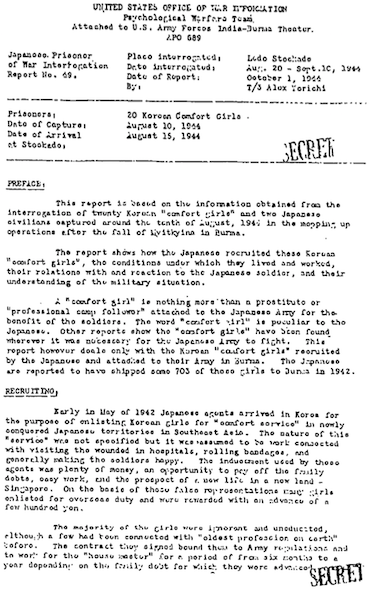 Indeed, the report does contain passages that seem to uphold right-wing nationalists’ view that “comfort women” were prostitutes making good money doing business with the Japanese military. The right-wing nationalists selectively quote passages such as “a comfort girl is nothing more than a prostitute or ‘professional camp follower’ attached to the Japanese Army for the benefit of the soldiers,” or “they lived in near luxury… they had plenty of money.”

The right-wing nationalists cannot help also quoting parts of the document that do not actually help their argument that the author was an objective third party, but are too pleasurable for them to ignore. For example, they like to quote the report’s description of Korean “comfort women” as “uneducated, childish, whimsical, and selfish” and “not pretty either by Japanese or Caucasian standards” (this is why Marano decided to place a paper bag over the Glendale memorial, according to his own article published in Japan). While Japanese nationalists may be quoting these passages to amuse their racist and sexist selves, they clearly show that the author’s prejudice toward Korean “comfort women.”

Some of the Japanese right-wing nationalists cite this report as if it is a newly uncovered historical evidence, but it has been known among scholars of “comfort women” for more than 20 years. In fact, it was part of the supporting documents compiled by the Japanese government when then-Cabinet Minister Yohei Kono released the famous statement in 1993 in which Japanese government acknowledged responsibility for its direct involvement in the trafficking and exploitation of “comfort women” for the first time. While right-wing nationalists believe the report to be the “silver bullet” proving their case, scholars actually consider it one of many documents that prove Japan’s culpability.

Right-wing nationalists are correct that the U.S. military report describes a “comfort woman (girl)” as “nothing more than a prostitute.” But in the next paragraph, the report details how “comfort women” were taken from Korea under false pretense (offer of a good job) and placed in a situation that they could not escape from due to debt. Also according to the report, most “comfort women” were never involved in prostitution prior to arriving at Japanese military “comfort stations,” and many were considered “underage” under the International Convention for the Suppression of the Traffic in Women and Children of 1921, which Japan had signed.

“House masters” took 50-60% of the fees paid by Japanese soldiers, depending on the amount of money the women owed. Women also had to purchase food and other necessities from the house masters, which “made life very difficult for the girls” because house masters often charged excessively high prices for these necessities. We find these descriptions believable because they are very similar to how contemporary human trafficking cases look like.

The report also states that women had the freedom to refuse customers, for example when a soldier was extremely drunk. But even if it were true, they obviously did not have the freedom to refuse the “job” altogether and leave because they were taken far away from home in a foreign land and had to repay their debt, which was made difficult by the fact that they had to pay excessive prices for food and other necessities in order to survive.

To understand why the report seems to contain such contradictory information (did “comfort women” lived in near luxury, or had difficult life due to economic exploitation?), we need to understand the context and purpose of the report itself. The report’s author is Alex Yorichi, a Japanese American soldier working for the U.S. Army’s Office of War Information, Psychological Warfare Team. Yorichi was tasked with finding out the effectiveness of Japanese-language leaflets that the Psychological Warfare Team had distributed in Japanese-occupied territories in Burma, and interrogated “comfort women” and their “house masters” as part of that investigation.

A copy of the U.S. military report is available for download here.