Aside from the 1944 U.S. military report that we analyzed previously, there are a few more historical documents that the Japanese far-right historical revisionists use repeatedly as “evidences” that “comfort women” were not systematically trafficked by the Japanese military and its contractors, but were recruited legally and ethically. These documents come in three categories: 1) recruitment ads published in Korean newspapers seeking applicants for “comfort women”; 2) the 1938 directive by Japan’s Deputy Army Secretary requesting the military to carefully vet contractors recruiting and managing “comfort women” to ensure that their conduct would not “disgrace” the Japanese military; and 3) newspaper articles that “prove” that Japanese government prosecuted kidnapping and forced prostitution.

Let’s start with the recruitment ads. Right-wing nationalists argue that the existence of ads explicitly recruiting “comfort women” proves that the recruitment was done fair and square, and that their pay was quite high. But there is a problem with it: the literacy rate for Korean women of that generation was low. In other words, except for a small number of elites, who would probably not voluntarily choose to become “comfort women,” Korean women at the time would not have been able to read the ads. 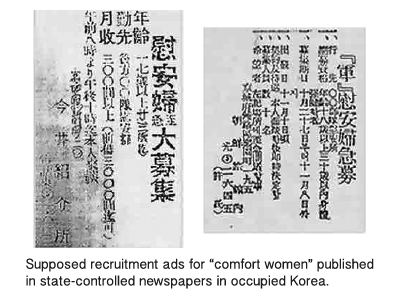 Historians believe that these ads were not actually targeted toward potential “comfort women” applicants, but toward independent recruiters and subcontractors that would supply the contractor with the women that they could then ship to “comfort stations” across Asia. Thus, the only thing these ads prove is the existence of a market to buy and sell women, and they do not indicate how these women were recruited. Besides, only two such ads have been discovered so far, and cannot be responsible for the recruitment of all the women who became “comfort women.”

Which brings us to the next document: the 1938 directive by the Deputy Army Secretary that denounces recruiters that use deceptive or otherwise problematic tactics that “diminish the military’s dignity” and urges Japanese military to carefully vet contractors. This document was first publicized by Asahi Shimbun newspaper in 1992 as a proof that the Japanese military was directly involved in the operation of the “comfort women” system, but since then reclaimed by the right-wing nationalists as an evidence for what they call “good involvement”–that is, the argument that Japanese military’s only involvement with the “comfort women” system was to prevent trafficking and protect women. 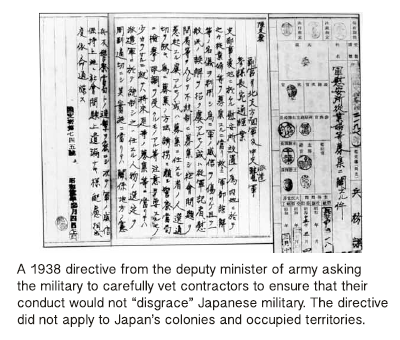 The impetus for this directive came from early stages of the “comfort women” deployment, when most “comfort women” were still Japanese women. The military tried to recruit “comfort women” from women who were already working at brothels (most likely under debt bondage), luring them with a way to repay their debt more quickly. But some contractors began luring other, “pure” Japanese women by deceiving them about the nature of the “good job” they were offering, and it led to criticisms from within Japan. The 1938 directive specifically mentions instances of kidnapping and deceptive recruitment in Japan, and it only applies to recruitment in Japan. No comparable directives have been issued that applied to Japan’s colonies (Korea and Taiwan) or its occupied territories.

To counter this criticism, the right-wing nationalists often produce newspaper articles about arrests and prosecution of individuals who kidnapped or sold women into prostitution in Korea. But these are cases of simple kidnapping or forced prostitution by criminal elements, and do not show that Japanese government properly regulated its licensed contractors who recruited Korean women for Japanese enforced military prostitution, or that it protected Korean women from such recruitment. 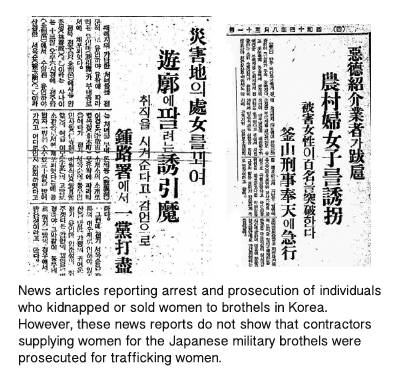 Japan was a signatory to the International Convention for the Suppression of the Traffic in Women and Children of 1921, which prohibited the recruitment of women under the age 21 for prostitution even with her consent, as well as the use of force, fraud, or coercion (including debt bondage) in the recruitment of adult women for prostitution. However, when Japan signed the treaty, it declared that new treaty would not apply to its colonies (Korea and Taiwan) or occupied territories, clearly indicating the Japanese government’s conscious policy choice to permit and sanction the trafficking of Korean and Taiwanese women and girls, which helped to further its imperial war of aggression in Asia and the Pacific.