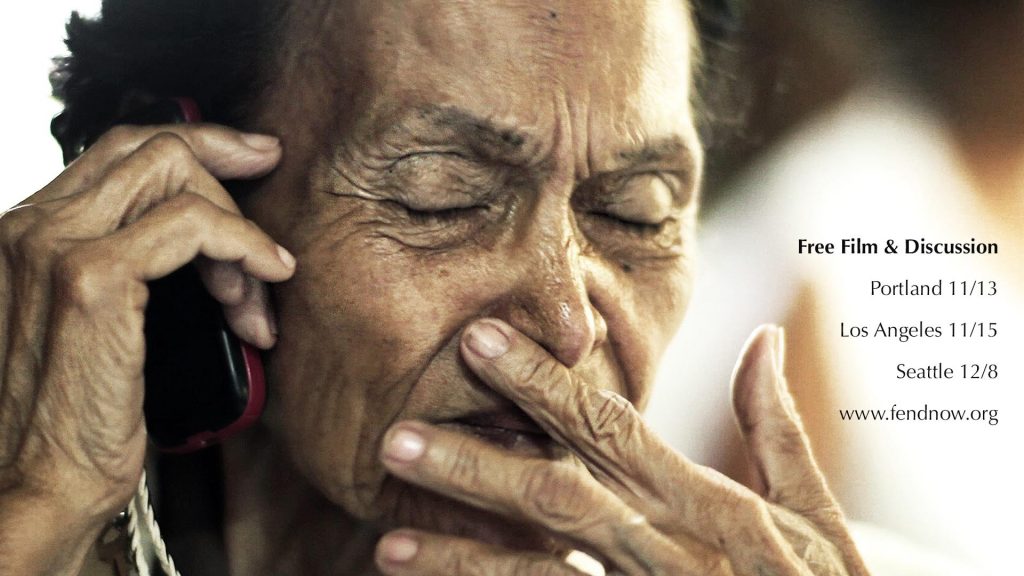 Japan-U.S. Feminist Network for Decolonization (FeND) joins community groups in three cities to bring free screenings of the award-winning documentary “The Apology” directed by Tiffany Hsiung followed by discussion in Portland, Los Angeles, and Seattle in November and December 2018.

The film, which aired on PBS in October, follows the lives of three survivors–from Korea, China, and the Philippines–of the WWII-era Japanese military sexual slavery/enforced prostitution known as the “comfort women” system.

“Comfort women” are estimated 50,000 to 200,000 women who were forced to provide sexual service for members of the Imperial Japanese armed forces between 1932 and 1945. Women from Japan, Korea, China, and across the rest of Asia-Pacific were recruited through various means–from debt bondage to deception to outright conscription or kidnapping–but almost all of them are considered victims of human trafficking in today’s standards.

In recent years, Japanese right-wing nationalists (mostly from Japan) have become increasingly bold in their denial of Imperial Japanese atrocities, organizing protests and filing lawsuits against American cities like Glendale and San Francisco that have enacted memorials honoring the victims and survivors of Japanese military sexual violence. Worse, the right-wing nationalists frequently invoke the legacy of Japanese American civil rights leaders who fought for redress for wartime Japanese American incarceration, equating the remembrance and honoring of victims and survivors of Imperial Japanese military atrocities to anti-Japanese persecution in the mid-20th century. That is why we felt it was important to partner with Japanese American and other Asian American groups across the West Coast to send a clear message that Asian American communities will not be divided by historical denialism and that we stand together for justice for victims and survivors of wartime atrocities.

Portland screening will take place on Tuesday, November 13th at 6pm at Multnomah Central Library (801 SW 10th Ave, Portland), US Bank Room and is co-sponsored by People Organizing for Philippine Solidarity (POPS) and FeND. The film will be followed by a brief discussion.

The events are in collaboration with POV, the award-winning independent non-fiction film series on PBS.